201 Thallium was the only isotope available for the clinician to image the myocardium from 1970 through about 1990.  It remained popular even after 99mTechnetium based tracers became available for single-day imaging protocols, viability studies, or in conjunction with 99mTc tracers in ‘hybrid’ dual-isotope protocols. It was common to do resting Thallium perfusion imaging, followed by 99mTc-sestamibi gated SPECT stress imaging, combining the best characteristics of both radiopharmaceuticals. When the supply of 99mTechnetium became unavailable from vendors, old-standbyThallium protocols kept Nuclear Cardiology labs open for business without missing a beat.Thallium imaging is historically significant as the epitome of myocardial perfusion imaging for decades, becoming a sort of ‘gold standard’ for its time.

Tl-201 scintigraphy is most often performed in conjunction with exercise stress in patients suspected or known to have CAD. In addition to detection of stress-induced ischemia with exercise, the radionuclide test permits simultaneous assessment of regional myocardial viability.

The scintigraphic images obtained early after injection reflect the blood flow conditions at the time of tracer administration. Perfusion defects observed on the Tl-201 images obtained 10 minutes after exercise indicate transient ischemia or a scar, or a combination of the two. Thallium scintigrapy is most effective using gated SPECT technology, allowing for wall motion analysis, volumetric data, TID assessment, subsegmental defect analysis and calculation of ejection fraction. I have seen exquisite gated Thallium SPECT data in my career in offices willing to modernize their Thallium dosing recommendations.

Image quality, of course, is dependent on a good count rate, which in turn depends on the amount of Thallium injected. Unless your patients are all males under 150 lbs., the 3 mCi stress dose may not yield the counting statistics or image quality physicians have grown accustom to since the development of Technetium tracers. Have your Medical Physicist and Cardiologists hammer out a stress/reinjection dose chart that will maintain the image quality that we all expect.

Dose  For stress imaging 4-5 mCi is administered then a 1-2 mCi injection is given at least 30 minutes prior to redistribution imaging, with a total dose not exceeding 7 mCi.

It is helpful to leave the patient’s IV access intact during the post-stress imaging process. When the stress image is done, administer the patient’s reinjection dose, then remove the IV.

Most nuclear medicine departments begin post-stress imaging at about 10 minutes post injection to wait for the position of the heart to stabilize in the chest. With a LEAP collimator, and dual energy photopeak, the stress or redistribution phases should be gated when using higher doses of Thallium for SPECT myocardial imaging. When used in a hybrid protocol with Sestamibi, it is important to use
high resolution or VXHR collimation and the number of stops during SPECT acquisition should match.

What makes Tl-201 ideal for detecting reversible ischemia in cardiac muscle is the dynamic equilibrium of Tl-201 between the myocardium and vascular pool. Defects, corresponding to hypoperfused but viable regions, usually normalize over several hours, whether Tl-201 injection is made during exercise or at rest.

Dynamic Equilibrium    Approximately 20 to 30 minutes after its initial distribution phase, the Tl-201 concentrated in perfused muscle leaves the myocardium and is partially replaced by circulating Tl-201 from the systemic pool, which undergoes constant recirculation and redistribution. Thus, several hours after initial tracer administration the scintigraphic images depict an equilibrated pattern. This is the basis of the “stress-redistribution” imaging strategy that has been used in the detection of CAD.
In the absence of attenuation artifact, ‘cold’ (photopenic) defects seen on early images may represent areas of significantly decreased flow or areas of myocardial scar without viable cells to fix the tracer. Matching perfusion defects on the delayed or reinjection images may define permanently scarred tissue. Areas demonstrating equilibrium or “fill-in” of activity represent viable myocardium rendered ischemic during exercise.

The redistribution phenomenon is a consequence of both the accumulation of Tl-201 in hypoperfused zones and the loss of thallium from the normal myocardium. During this redistribution phase, Tl-201 enters the myocardium from the systemic pool (input) and it leaves the myocardium (output or washout). The difference between the input and output is reflected in the net myocardial washout rate. The local concentration of Tl-201 changes until equilibrium is reached and the ratio between input and output becomes constant.

Several factors that contribute to the washout rate of Tl-201 include: ischemia; the target-to-background ratio; alterations in myocardial blood flow after tracer administration; and elevation in blood glucose levels resulting from eating soon after injection (Thallium shifts to the stomach).

Assuming that adequate time has been allowed for the ultimate redistribution pattern to be established, Tl-201 defects may be categorized as reversible, nonreversible (fixed) or as exhibiting reverse redistribution. Redistribution images are generally acquired 4 hr after initial administration. In reversible defects, the net myocardial washout rate of Tl-201 is slower in the region of the defect than in normal areas. This ultimately leads to equalization of the concentration of Tl 201 in initially normal and abnormal regions. This reversibility, whether after resting or exercise injection, is associated with the presence of viable myocardium. The time period for redistribution may vary, and complete redistribution may require up to 24 hr.

In partially reversible defects, the concentrations of Tl-201 in the normal and defect regions approximate one another during the redistribution phase but do not equalize.

In nonreversible (“fixed”) defects, the initial ratio of Tl-201 concentration between the abnormal and normal regions is maintained over time, because net washout rates for Tl-201 are similar in the normal and abnormal zones. Fixed defects are usually associated with the presence of myocardial scar. The level of regional perfusion and regional Tl-201 uptake in fixed defects has been shown to be directly related to the level of regional viability and the likelihood of functional reversibility.

In regions demonstrating apparent ‘reverse redistribution’, the relative intensity of the defect compared with that in the normal region decreases over time, and the defect appears more prominent at rest. This finding has been related to regional viability or admixed viable or nonviable tissue. This pattern can be found with nontransmural infarction associated with a patent infarct-related coronary artery, more commonly after revascularization, and may result from higher-than-normal blood flow to the residual viable myocardium in the partially infarcted zone. In one study, the phenomenon was suggested to be a normal variant, and may relate to varying technical factors, such as background activity and camera angulation, as well as regionally increased and varying washout rates in some normal states.

NORMAL APPEARANCE OF THE THALLIUM-201 SCINTIGRAM

Normal Tl-201 scintigrams obtained at rest should demonstrate uniform uptake of thallium throughout the left ventricular myocardium. The myocardium may appear thinner in the apex than in other portions of the ventricle, and the valve planes also demonstrate absence of uptake, giving the ventricle a horseshoe shaped appearance on long-axis SPECT views and on steep oblique planar views. The LV has a doughnut shaped appearance on short-axis SPECT views and a variably circular or ellipsoid appearance on LAO planar views.
The right ventricle does not typically appear in planar imaging. Prominent right ventricular activity suggests RV hypertrophy, an indicator of pulmonary hypertension. 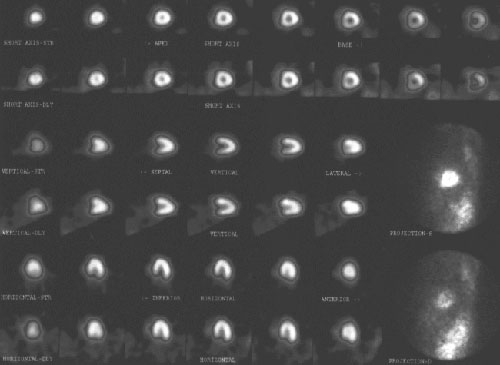 “Following the initial myocardial uptake phase after intravenous injection, there is a continuous exchange of myocardial Tl-201 and Tl-201 in the blood pool. Tl-201 is continually clearing from normally perfused myocardium and replaced by recirculating Tl-201 from the residual activity in the vascular compartment. Normal myocardial zone washout of Tl-201 parallels washout of the tracer from the blood pool. This process of continuous exchange forms the basis of Tl-201 ‘redistribution’. Redistribution implies delayed defect resolution and is observed when Tl-201 is administered during transient underperfusion of the myocardium or with a chronic reduction in myocardial blood flow (‘rest redistribution’). With respect to myocardial Tl-201 scintigraphy, redistribution refers to the total or partial resolution of initial defects when assessed by repeat imaging at 2.5 to 4 hours after Tl-201 administration.”

“Tl-201 redistribution over time when the tracer is injected in the resting state (rest redistribution) can be observed in patients with chronic asymptomatic CAD, unstable angina, severe stable angina, or after acute MI. Many patients who demonstrate rest redistribution may have hibernating segments with persistent systolic dysfunction. These patients have ‘resting’ hypoperfusion or resting ischemia with initial perfusion defects at rest that show subsequent total or delayed redistribution… There is substantially slower washout of Tl-201 over time from chronically underperfused regions, as compared with more rapid Tl-201 washout from nonischemic regions. These disparate washout rates from hypoperfused and normal myocardium result in near normalization of Tl-201 activity between nonischemic and stenotic regions by 4 hours.”

There are two problems with Thallium imaging, due to the low energy of the isotope and the tissues surrounding the myocardium. Overlying soft tissue of the breast causes attenuation of activity from the anterior wall. In the Planar image, the lateral heart border may appear to have fewer counts; in the SPECT image, the anterior segment on the SA and vertical slices may be affected.
A second artifact is interposition of the diaphragm between the gamma camera and the heart on the left lateral view with the patient supine, almost exclusively in the male patient. The posterior lateral wall of the LV can be attenuated, causing a photon deficient defect. The diaphragmatic artifact is minimized adding a static image before or after the ECT acquisition with the patient in the right lateral decubitus position.

“Cardiac creep” describes a phenomenon seen on SPECT images caused by changes in heart position due to lung expansion and diaphragm position. (In a cine projection image, the heart is seen to “creep” upward in the chest during the scan, causing a problematic motion artifact.)

DOWNLOADS FOR THE TECHNOLOGIST