Cardiologists are using PET in their protocols to treat CAD in these ways:

Radiolabeled metabolic substrates give us a look at the in-vivo myocardial biochemistry and help evaluate therapeutic interventions for acute ischemic states. The positron emitting isotope as a tracer is crucial in accurately imaging and quantifying local tissue perfusion, blood volume, glucose and oxygen consumption and fractional extractions of various metabolites and substances.

Metabolic imaging may be most useful in patients with severely impaired regional and global function, in the case of F-18 FDG imaging of hibernating myocardial tissue.

Clinical Applications of PET in Cardiology

Positron-emission tomographic techniques are employed to map myocardial perfusion and detect ischemic response to stress in the presence of coronary artery disease, and in the assessment of myocardial tissue viability.

Injury to the myocardium is typically caused by decreased blood flow a consequence of atherosclerosis. Such evaluations involve monitoring regional coronary blood flow and ongoing active metabolism. These procedures can help identify potential viability of injured myocardium, regions likely to benefit from revascularization to facilitate its return to normal function. For example, PET study showing increased glucose consumption (using FDG) in myocardial areas of decreased blood flow (using N-13 ammonia or Rb-92) would indicate that restoration of cardiac function in those areas would be possible. Impaired contractile function in response to chronic reduction of resting blood flow may mask myocardial viability in patients with severe CAD. With the use of O-15 water, cardiologists obtain images of artery walls, where live tissue is designated by areas of illumination caused by high oxygen consumption.

Monitoring coronary blood flow with PET can identify diffuse atherosclerosis, often undetectable on an angiogram. Even more important is the fact that PET can accurately diagnose heart disease 10 to 15 years before symptoms appear or before the patient suffers a heart attack.

Positron-emitting radionuclides used for the assessment of regional perfusion can be classified into two groups: tracers that are only partly extracted by the myocardium (Rb-82 Chloride and N-13 Ammonia) and tracers that are freely diffusible (O-15 Water).

Rubidium-82 Chloride, an FDA-approved radiopharmaceutical, is available from a Strontium-82 generator and has a physical half-life of 75 seconds. Rb-82 behaves physiologically in a fashion similar to Thallium-201 and is initially concentrated in the myocardium in proportion to regional myocardial perfusion, with an extraction of 65%. Retention of Rb-82 Chloride depends at least partly on sodium-potassium adenosine triphosphate transport.

Myocardial accumulation of Rb-82 chloride depends partly on the metabolic state of the myocardium. The short half-life of this tracer permits repeat imaging.
Rubidium-82 grew in popularity during a time when PET scan providers were limiting the clinical use of the radiopharmaceutical N-13 Ammonia because of the requirement for an on-site cyclotron and lack of insurance reimbursement for its use. Distinct advantages of Rubidium-82 are that it has a short half-life (76 seconds) and that it can be created via a chemical reaction from a column generator instead of by a cyclotron as are many other radiopharmaceuticals. Its short half-life allows for rapid rest/stress studies to be performed, making possible serial measurements in the same patient. Kinetics of the washout phase may be used as an index of viability.

13-N Ammonia is the extractable perfusion tracer most commonly used with PET, and a good myocardial perfusion agent for the detection of coronary artery disease. N-13 Ammonia, produced by deuteron bombardment of oxygen-16 in a cyclotron, localizes in the myocardium in approximate proportion to regional myocardial perfusion. It has been suggested that 13-N ammonia may cross cell membranes by passive diffusion or as ammonium ion (13NH+4) by the active sodium-potassium transport mechanism influenced by the concentration gradient across the cell membrane. It is rapidly cleared from the blood and diffuses into myocardial cells. Because of its 9.9-minute physical half-life and favorable myocardial kinetics, image quality with 13-N ammonia generally is superior to that obtained with the shorter half-life of Rb-82 chloride. The short half-life makes it possible to do multiple studies in a short time. One of the drawbacks, though, is that the process of absolute quantification of myocardial retention is complicated by the short half-life and rapid degradation of ammonia.

Most PET studies to assess myocardial perfusion to detect CAD have used either Rb-82 chloride or N-13 ammonia. The specificity of PET imaging tends to be 10 – 15% higher than that of SPECT, due to higher energy photons used for imaging and improved correction for attenuation.

To detect ischemia with PET radiopharmaceuticals, two injections are required: one set of images is recorded at rest, and a second set is recorded after stress, usually produced by a pharmacologically induced vasodilation with adenosine.

A fundamental characteristic of the myocardium is its continuous requirement for oxygen and metabolic substrates to meet its energy demands. This process largely occurs by oxidizing fatty acids and glucose. Under normal conditions, fatty acids are the preferred energy source for overall oxidative metabolism. When blood flow is reduced to the heart muscle and ischemia ensues, fatty acids can no longer be oxidized and glucose becomes the preferred energy source. This metabolic phenomenon is useful for the identification of myocardium that is underperfused but still viable. Such tissue is often hypokinetic or akinetic but returns to normal or near-normal function if blood flow is restored. Consequently, in patients with severely impaired ventricular function, combined with measurements of myocardial perfusion and glucose metabolism have been advocated. It may be noteworthy to mention that eating fat and protein shifts the heart away from using glucose as an energy source.

Fluorine-18 FDG, C-11 palmitate, and C-11 acetate are typical examples of PET radiopharmaceuticals used for metabolic cardiac studies. ‘Deoxyglucose’ is an analog of glucose that can be labeled with F-18, a cyclotron produced radionuclide, to form F18-FDG. Its myocardial uptake reflects overall myocardial utilization of glucose. Palmitate is a naturally occurring fatty acid that can be chemically synthesized and labeled with C-11, a cyclotron-produced radionuclide with a physical half-life of approximately 20.4 minutes. Its myocardial uptake and clearance reflect the myocardial utilization of fatty acids.

The utilization of fatty acids and glucose by the heart is exquisitely sensitive to the level of glucose, fatty acids, and insulin in the blood, as well as the level of blood flow to the myocardium. Consequently, the substrate environment must be standardized when these two tracers are used to study myocardial metabolism. FDG-6P is the trapped form of the compound. Injected after the patient has fasted, insulin forces FDG into muscle cells, including myocardium.

Acetate labeled with C-11 has emerged as a promising tracer of overall oxidative metabolism under diverse loading conditions and levels of blood flow. Unlike C-11 palmitate and FDG, the myocardial kinetics of C-11 acetate are relatively insensitive to changes in the substrate environment.

Fatty acid metabolism is a major pathway of energy production in normally perfused myocardium. This process is impaired during and after events associated with myocardial ischemia and succeeding reperfusion. Therefore, evaluation of fatty acid metabolism yields important data on myocardial conditions in ischemic heart disease.

Findings indicate that stress-redistribution Thallium scanning underestimates tissue viability. Uptake of F-18 FDG has been observed in areas of redistribution on Thallium scans in areas of persistent defect, correlates well with the presence of post infarction angina, the site of electrocardiographic ischemic changes, and the presence of severe CAD. Accurate detection of reversible myocardial ischemia is the first step in selecting patients for interventional therapy.

PET imaging is particularly useful to screen candidates who might benefit from surgical intervention to improve impaired regional myocardial contractile function due to repetitive stunning. Revascularization (angioplasty, coronary bypass surgery) can greatly improve regional function in patients with chronically ischemic yet viable cardiac muscle. The risks and complications of intervention in these patients make careful assessment and selection critical.

It is well established that PET viability studies make the indications for revascularization or heart transplant more precise and more secure, in selected cases. PET assesses tissue viability based on residual perfusion and metabolic activity in ischemic regions. PET allows for the combined assessment of glucose uptake and also of myocardial oxidative metabolism, with the additional possibility of expressing results in quantitative terms.

F-18 FDG is the most important radiopharmaceutical employed in cardiac PET. Patients with collateral dependent myocardium show an enhancement of FDG uptake, raising the possibility of repetitive stunning as a mechanism of increase in FDG uptake.
A shift in substrate metabolism from fatty acid oxidation to glucose metabolism is the mechanism of F-18 FDG uptake in chronically ischemic myocardium. Absorption of F-18 FDG in the presence of reduced blood flow is predictive of recovery of ischemic tissue. Under conditions of glucose loading, a relative excess of myocardial FDG, compared with perfusion, is indicative of viable ischemic myocardium. Although Thallium perfusion imaging with reinjection is very useful for the detection of viable myocardium, FDG imaging appears to be slightly more sensitive in patients with severely depressed ejection fractions (LVEF < 30%).

Typically, PET imaging for viability is performed pre- and post-revascularization (coronary bypass). F-18 FDG images are typically compared with resting Rb-82 or Tc-99m Sestamibi perfusion images. Perfusion defects which “fill-in” with FDG (mismatches) mark hibernating but viable myocardium. Preserved FDG uptake in the absence of Thallium or Sestamibi uptake correlates with the presence of post infarction angina, the site of electrocardio-graphically detected ischemic changes, and the presence of severe CAD.

Assess Function-Perfusion-Metabolism
Positron emission tomography imaging with FDG allows the physician to determine myocardial function, perfusion and metabolism at the same time. FDG is transported across membranes and phosphorylated to FDG-6-phosphate in the myocyte. FDG-6-phosphate does not enter glycolysis or participate in glycogen synthesis. The radioactivity concentration in the myocardium represents the integral of the rates of glucose phosphorylation.

Predict Recovery Post- Revascularization
It is possible to predict whether tissue will recover following revascularization based on FDG uptake. Regional improvement in contractile function is more frequently observed in segments with FDG uptake identified before a revascularization procedure. The predictive value for functional recovery of areas with preserved or relatively increased FDG uptake (compared to decreased perfusion) is higher in segments with severe regional asynergy. This observation supports the concept that PET is able to provide particularly useful information in cases with severe impairment of LV function. 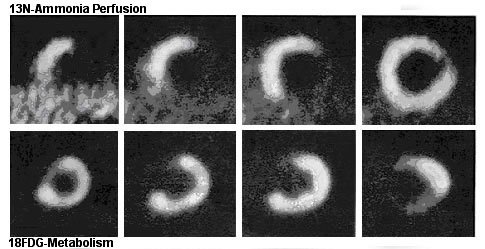 In chronic ischemia, aerobic metabolism is slowed while the anaerobic metabolism is accelerated. Increased FDG uptake in asynergic myocardial regions with reduced blood flow at rest has become a scintigraphic marker of hibernation. The mismatch pattern demonstrates that FDG metabolic activity is preserved in the lateral and inferior regions. Lack of FDG metabolic activity in the anterior and septal regions reflects the utilization of fatty acid rather than glucose as the primary fuel in such normally perfused myocardial regions. 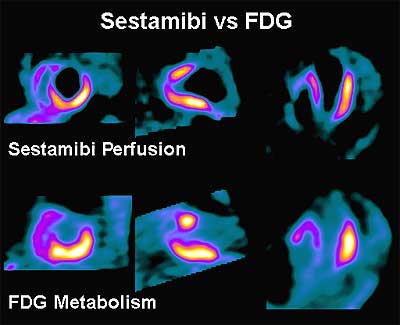 A comparison of 99mTcSestamibi and 18 FDG in a patient who will not benefit from revascularization: note that the anterior and apical walls of the left ventricle appear to be scarred.