Functional cardiac imaging using the first-pass technique is sometimes referred to as radionuclide angiography, whereby the initial passage of the radiopharmaceutical through the cardiac chambers is recorded. An advantage to the technique is that the tracer activity is limited to one chamber at a time, so it is easier to define regions of interest during processing, and background interference is thus minimized.

First pass studies are obtained by injecting a compact bolus of a suitable radiopharmaceutical intravenously. The bolus is introduced into a medial vein in the basilic system at the antecubital fossa. Use of the veins in the cephalic system should be avoided to prevent “hang up” of the bolus at the thoracic inlet.

For labs using Tc99m-based radiotracers, a First Pass study can give the physician valuable information about cardiac function, pulmonary transit times, right and left ventricular ejection fractions, stroke volumes, regurgitant fractions and more in a one-minute dynamic flow study.  When our lab had a SIM-400, our resting Cardiolite injections included a routine first pass flow study.  Once mastered, the acquisition was easy to set up and process, and we were able to compare our stress gated LVEF with the resting EF.

PATIENT PREPARATION      Since the radiopharmaceutical will be administered using the bolus technique, it is recommended that an 18-20 gauge angiocath placed into an appropriate vein in the forearm. The catheter should be connected to short extension tubing and a three-way stopcock. A syringe containing 10-20 ml of saline of 5% dextrose solution is connected to one of the stopcock’s ports, and the extension tubing is filled with the flushing solution. If an exercise angiogram is to be performed, ECG electrodes should be attached and a baseline tracing obtained.

Macroaggregated albumin is NOT a suitable tracer, as the particles are trapped in the lungs after exiting the right heart and the left heart is never visualized.
THE FIRST-PASS ACQUISITION TECHNIQUE
Data is typically acquired in rapid frame mode, without ECG gating (25 msec/frame), for at least 30 seconds.  Remember, though, in patients with CHF, bolus transit may be significantly delayed and conservatively, first-pass imaging should be carried out for 60 seconds.

Routinely, the left ventricle is studied in the anterior position and a 20-30 degree RAO position is optimal in studying the right ventricle. The RAO separates the RA and RV and is suitable both for quantitative and quantitative analysis of biventricular function.

In most labs, the anterior view is chosen because:
– count rate and resolution are maximal in this view,
– it is easy to perform and standardize during exercise,
– it provides good separation between the heart and lungs,
– it is satisfactory for analysis of segmental wall motion, and
– it permits assessment of both right and left ventricular parameters with a single injection.

Shunt evaluation      A left-to-right shunt can be detected by the rapid recirculation of tracer to the lungs once it enters the left side of the heart. Prolonged transit in the right side of the circulation may also be detected by quantitative analysis of the time-activity curve over the lung, which will permit shunts as small as 20% to be diagnosed and quantified from the calculated pulmonic: systemic flow ratio.

A right-to-left shunt is indicated by the appearance of the bolus in the left side of the heart and aorta before the appearance of lung activity. Right-to-left cardiac shunting may be detected using an injection of 99mTc albumin aggregates (MAA). The ratio of tracer in the lung to tracer gaining access to the systemic circulation provides a measure of the severity of shunting. Right-to-left shunts are generally given as a relative contraindication to the use of macroaggregated albumin, owing to the theoretical risk of embolizing the capillary bed of the brain. In the presence of shunt, the radiotracer is visualized not only in lungs but in other parts of the body.

Camera selection      The camera system chosen for the first-pass study must provide adequate temporal and spatial resolutions with acceptable counting statistics. The multicrystal camera is preferred over single crystal gamma cameras because they permit much higher count rates without significant dead-time losses (as high as 450,000 counts/sec). Multicrystal systems vary: they utilize an array ranging from 294 to 400 individual sodium iodide crystals and are coupled by means of a light pipe array ranging from 35 to 115 photomultiplier tubes.

The first pass technique utilizes only the initial transit of a radionuclide bolus as it passes through the central circulation. The procedure requires about 25-60 seconds for data acquisition. The short acquisition time and relative lack of dependence on patient cooperation make it an ideal assessment of cardiac performance in:

Resting exams may be performed with the patient in the supine or upright position. Exercise exams require that the patient’s chest be positioned firmly against the face of the detector. The anterior and RAO views are preferred. However, any view is possible since tracer activity will be limited to one cardiac chamber at a time.

After the camera is prepared and the patient is positioned, a blood pressure cuff is placed on the patient’s arm above the catheter and inflated. Then the tracer is introduced into the butterfly extension tubing, and the stopcock is reset to allow the flushing solution through the tubing. During an exercise study, the tracer is injected at peak exercise.

Major advantages: data is collected rapidly over very few cardiac cycles, so function can be measured at peak stress during exercise ventriculography or other intervention. Right ventricular function is easier to measure than on MUGA studies, where there is usually overlap between the right and left ventricles in the RAO view and between the right atrium and the right ventricle in the LAO view.

Major disadvantages: low counting statistics in each frame; only a limited number of repeated measurements or views is possible. A creative approach made possible by 99mTc based myocardial agents is to obtain a first-transit ventriculogram and then obtain gated SPECT perfusion images. 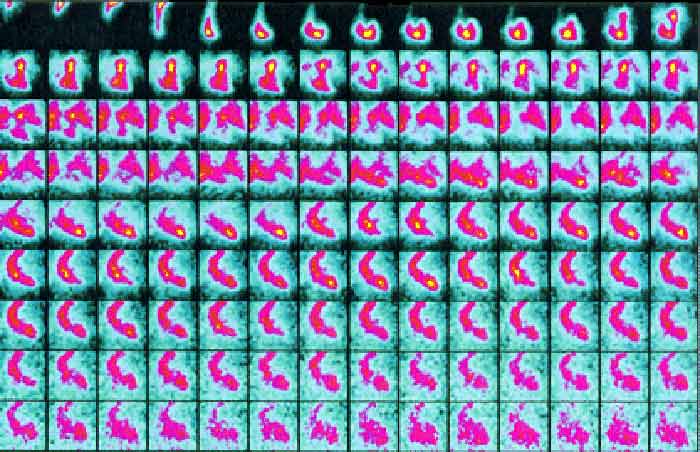 Acquired on the Picker SIM400, a 400 crystal camera.
This is data that has been preprocessed to sum the original 25 msec/frame raw data set.

FIVE STAGES OF THE FIRST PASS

Below is a serial display of the radionuclide making its initial transit through the heart and lungs. In the first three frames, we see the radioactivity entering the right side of the heart at 3-6 seconds. After clearing the lungs it is seen entering the left ventricle at 8-10 seconds, and exiting via the aorta at 12-15 seconds after the injection.

The five phases of the first pass show the radioactivity in distinct regions of the heart. Illustration obtained from Introduction to Nuclear Cardiology, Third Edition, 1993, DuPont Pharma

I am well aware that most nuclear cardiology labs are not equipped to offer the exercise first pass, but because my nuclear medicine student clinical training included this test and we did them for a number of years in RIH, they deserve some space in this website. I find the technique using the Baird Atomic scintillation camera positioned upright with a patient seated in front of the device pedaling an ergometer was the most user-friendly for serial rest/stress first pass acquisitions.  Patients found it easy to comply with the test, and technologists could bang out a sulfur colloid resting followed by a pertechnetate stress acquisition in a 30 minute appointment slot.  Years later, in another facility, we used a bicycle ergometer table with the patient reclining with the Picker SIM-400 detector over chest and face, with very little room for a tech to squeeze in and administer the radiotracer at peak exercise. Processing with the SIM was easier, though, and with the aid of a radioactive Americium button source, we could correct for motion, too.

In the period prior to gated SPECT ejection fraction and wall motion evaluation, the rest/stress first pass was a cheap and easy way to get a lot of good data. These exams were particularly invaluable in pulmonary hypertension and CHF cases.