Electrocardiography is the most widely used modality for the evaluation of a patient’s baseline cardiac status, a subject which has been discussed in Lessons 4a through 4c.

Two examples of commonly used noninvasive radiographic procedures include the chest x-ray and computed tomography (CT scan).  The chest xray gives information to help the physician make a diagnosis when the patient’s symptoms may suggest any number of problems, giving a picture of gross cardiac anatomy, ruling out other cardiac or noncardiac disease, or detecting complications of MI.

Computed Tomography   One type of computed tomography (CT) is cine CT with volume scanning, also known as electron beam CT (EBCT). This procedure has advanced the visualization of calcium deposits within coronary artery plaques. EBCT is noninvasive, easily accessible, and it is low risk for the patient. The study can be repeated at regular intervals to monitor the progression of the disease or response to treatment. Because this procedure is so readily available, EBCT is used as a screening tool for detecting CAD. Many hospitals and outpatient facilities are equipped to perform routine EBCT. This screening procedure is being used more frequently for patients under 40 years old who have a family history of CAD and used as a baseline study for other patients who need to know the extent of calcium deposition within their arteries. Several clinical studies are evaluating the use of EBCT in post-revascularization patients as a means for continuously assessing restenosis of the bypass grafts. EBCT also has shown promise in the area of prevention, where coronary arteries are monitored in those patients who have multiple risk factors and are at a higher level of risk for disease.

Magnetic Resonance Imaging   Magnetic resonance imaging (MRI) utilizes a powerful, highly uniform magnetic field to obtain anatomic images in multiple planes. Magnetized protons within a patient are excited by radiofrequency pulses. The signals received as the nuclei return to an equilibrium state are transformed into a series of diagnostic images. This noninvasive procedure produces images that reflect the physical and chemical properties of tissue.

Because blood produces a unique signal, MRI is a useful technique for imaging the heart and great vessels. However, myocardial imaging can be challenging because the orientation of the heart can vary between patients and because cardiac motion can cause artifacts. Long acquisition times have also limited the use of MRI for evaluating myocardial perfusion. However, advances in technology (stronger, faster coils) and increased computing power now allow rapid acquisition, thus improving temporal resolution and reducing motion artifacts and improperly recorded data.

Cardiac MRI can be performed with or without contrast agents. Some exams are resting, breath-held studies that are gated to the cardiac cycle. Placing the data into a cine loop provides the ability to simulate the beating heart. Subsequently, wall motion abnormalities can be assessed. Since cardiac MRI utilizes a larger field of view than echocardiography, MRI enables the clinician to assess the entire cardiac volume, the surrounding areas of the heart, the right ventricle, and the aorta.

Stress-induced cardiac perfusion and functional changes can be assessed through the use of a pharmacological stress agent and gadolinium-DTPA, a contrast agent. Although this stress test is similar to a radionuclide myocardial perfusion study, cardiac MRI is unlike nuclear medicine. Cardiac MRI allows visualization of the perfusion gradient across the wall of the myocardium, which plays a key role in detecting triple-vessel CAD. In addition, MR images are acquired every 100 milliseconds; therefore, the increased resolution allows for better visualization of perfusion defects in the endocardium.

Although MRI provides better spatial and temporal resolution than radionuclide imaging for myocardial perfusion imaging, numerous issues still need to be addressed before this modality achieves greater acceptance among clinicians.

The notion of a single, cost-effective study that will provide information on myocardial perfusion and function, metabolic information, coronary anatomy, and epicardial coronary artery blood flow serves to highlight the diagnostic potential of MRI in CAD.

Echocardiography  uses pulse-reflected ultrasound to examine the functioning heart. Ultrasound consists of sound waves emitted at a frequency of greater than 20,000 cycles per second. The application of diagnostic ultrasound to the field of cardiology was first shown to be feasible in 1954 by Adler and Hertz, who recorded moving ultrasonic echos from the mitral valve. Since 1954, ultrasonic echos from the heart have reflected abnormalities specific to a wide variety of heart diseases, including valvular, congenital, myocardial, and pericardial diseases. Because the anatomic components of the heart can be identified and their distances from the transducer can be measured, sizes of the various chambers (right and left ventricles, left atrium) and vessels (pulmonary artery and aorta) can be accurately estimated.

The illustrations below show how the ultrasound beam traverses the heart and scans a sector of the left ventricle to record a left ventricular echocardiogram. A transducer that both emits pulsed ultrasound waves and receives echos is placed on the patient’s chest, initially at the third to fifth intercostal space near the left sternal border. As a continuous recording is made on a strip chart, the transducer is tilted laterally and inferiorly so the echo beam scans the left ventricle from the mitral valve area to the apex, or is tilted superiorly and medially for the beam to scan from the mitral valve to the aortic valve.

Transesophageal echocardiography (TEE) is a minimally invasive procedure that utilizes the technique of upper endoscopy. Although this technique is not as frequently utilized as precordial echocardiography, it provides views and information that would not otherwise be possible, particularly of the posterior cardiac structures.

Stress Echocardiography is commonly used to evaluate patients with suspected CAD, especially when patients have normal resting echocardiograms. Stress echocardiography assesses regional myocardial function during or immediately after stress. For this technique, the patient must perform physical exercise (treadmill or bicycle) or undergo pharmacological stress with Dobutamine while a two-dimensional echo study is performed. In patients who have significant CAD, wall motion abnormalities will be visible on the stress study when compared to the resting study. These wall motion abnormalities occur because of the mismatch between the oxygen demand and blood flow of the myocardium.

Stress echocardiography has several advantages: The equipment is portable, allowing exercise echo to be available in the physician’s office or a private clinic. The technique is cost-effective, readily available, and involves no radiation.

Contrast Echocardiography The development of intravenous ultrasound contrast agents stems from the current performance limitations of ultrasound imaging and Doppler. These agents—injected or infused microbubbles that contain a gas—have substantially improved the diagnostic accuracy of echocardiography. When struck by sound waves, the contrast bubbles resonate, producing stronger ultrasound reflectors, which aid visualization. Contrast agents enhance the edges or borders of organs being studied.

Nuclear imaging  Clinical nuclear medicine provides important anatomic and physiologic information about various organs and organ systems through the use of special radioactive materials called ‘radiopharmaceuticals’ introduced into the patient intravenously for the purpose of visualizing organ structure and function, or evaluating perfusion, physiology, metabolism, or the infiltration of tumors, cysts, or infectious processes.  Radiopharmaceuticals are most often used for diagnostic purposes, although some radiopharmaceuticals can act as therapeutic agents, usually when administered in larger doses.

Nuclear medicine has distinct advantages over other diagnostic imaging modalities, such as:

Nuclear cardiology utilizes these basic principles of nuclear medicine to provide information for the diagnosis, prognosis and management of patients with CAD. Positron emission tomography (PET) imaging is a diagnostic procedure utilizing high-energy photons imaged by coincidence detection. PET imaging was developed in 1978 by Dr. Louis Sokoloff to evaluate anatomic and metabolic disorders, such as cancer and heart disease.In PET imaging, positrons and electrons collide, causing the formation of 2 high-energy photons (511keV each) that move in opposite directions from each other. The photons are recorded and counted by detectors only if they hit the detectors at the same time, thereby producing high-resolution three-dimensional images. These positron-emitting radionuclides are produced either in a generator (Rubidium-82) or in an on-site cyclotron (due to their short half-lives).

PET imaging can be used to assess myocardial viability using Fluorine-18 FDG. This agent has properties that allow imaging of the metabolic activity within ischemic tissue. Cardiologists have found tremendous value in PET imaging for determining the amount of viable myocardium after a patient has undergone revascularization. Although PET imaging is considered the gold standard for the assessment of myocardial viability, the technology is not widely used, mostly due to cost issues and limited reimbursement.

Coronary Ventriculography
This catheterization procedure is performed to study the motion of the left ventricle. Radiopaque dye is injected through a catheter into the ventricle and x-ray images reveal the movement of the ventricle through systole and diastole. These images demonstrate any dyskinesis indicative of aneurysm, old infarct, or valvular disease. Contrast material may also be injected into the right ventricle to visualize its size and wall motion and to look for tricuspid regurgitation 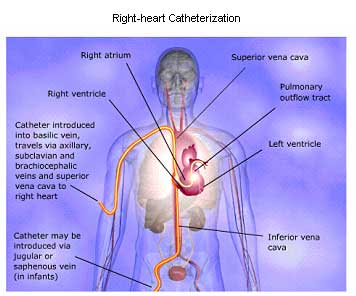 Angiography. Selective injection of a radiopaque contrast medium at various sites within the right heart may also be performed during cardiac catheterization. Venous injections are particularly useful in detecting the thickened right atrial wall of constrictive pericarditis and in defining certain congenital lesions, such as tricuspid atresia. Selective right ventriculography is commonly used to delineate congenital cardiac lesions, such as pulmonary stenosis and Tetralogy of Fallot.

Injection into the pulmonary artery makes it possible to visualize anomalies affecting pulmonary venous drainage and may be useful in detecting thrombi within the left atrium.

Left-heart Catheterization and Angiography.
Various methods for catheterization of the left side of the heart have been devised. Currently, the retrograde arterial approach is most widely used for catheterization of the aorta and the left ventricle. The catheter usually is inserted via the femoral artery following percutaneous puncture or through a small incision directly into the exposed brachial artery. The transseptal approach is employed to gain access to the left atrium and left ventricle, particularly when disease of the mitral or aortic valve is suspected. With this approach, a catheter is inserted via the right saphenous or femoral vein, and its tip is positioned in the right atrium. A long, curved needle introduced through the catheter is used to puncture the intact interatrial septum, producing a communication between the right and left sides of the heart. Frequently, the catheter is then advanced over the needle into the left atrium and ventricle.

Aortography. This form of angiography outlines the lumen of the aorta and the major arteries arising from it. Aortography is frequently used to assess the severity of aortic regurgitation and to determine the size and location of aortic aneurysms. Injection of contrast medium into the left atrium has been used to study mitral valve movement, as well as to detect thrombi within the chamber. 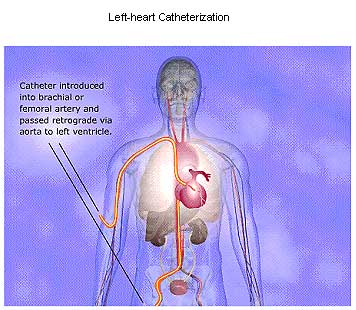 Electrophysiology Study (His bundle electrography), can be either diagnostic or therapeutic and is performed in conjunction with cardiac catheterization. Electrodes are placed at the end of the catheter to evaluate cardiac conduction patterns.
Diagnostically, the procedure is designed to identify the source of arrhythmias and any areas of abnormal impulse conduction. Once the problem has been identified and if the abnormality can be treated medically, the patient is placed on antidysrhythmic medication and followed with ECGs and possibly, another EP study.

Therapeutically, a laser or cryotherapy is used to destroy abnormal areas causing the conduction disturbance. Radio-frequency (Rf) energy is more commonly used for catheter ablation because it delivers a specific amount of energy to the tissue and the damage is irreversible. The Rf energy is directed through the catheter electrode to abnormal tissue producing a small myocardial lesion. The lesion prevents any further arrhythmogenic activity at that source. In more severe cases, surgery may be necessary to remove larger areas of abnormal tissue to restore normal conduction. Aggressive measures are taken to prevent cardiac arrest, a complication of this procedure.